Difference between revisions of "Apollo"

Apollo is the Wajas.com site mascot. He is a Diamond Token Normal Custom with a green base and blue Bird Wing Tips, Leg Spots, and Half Belly. 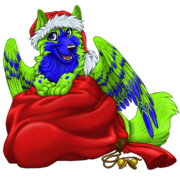 Apollo during the Santa Apollo event