Spitz Wajas are one of the 14 obtainable Waja breeds. As their name suggests, they are modeled after the Spitz dog type. They have long fur, a long, fluffy curled tail, short muzzles, and semi-short legs. They sport large eyes, a pleasant smiling expression, and are in a sitting pose.

A Hairball can be used on a waja to change it to the Spitz breed. 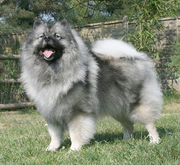 It is believed (official credit was never given) that the Spitz waja is based on a Keeshond waja breed suggested by user Dankesque (ID: 1080), which got massive amounts of support. "Spitz" is the name of the breed "group" that Keeshonds are a part of. For a time, this suggested breed was also sometimes called the Husky waja.

The breed idea started from two things that she wanted to see in a waja: a super-fluffy breed and another small breed. She wanted something big, fluffy, husky type and at the same time something like the Corsie - small and cute. She used the Keeshond dog breed as reference.

During a downtime, the "Keshhond Waja" generator created by Dankesque was greatly popular on the Wajas Downtime Forum. Users used it as an adoptable generator for their customs or favorite wajas.

Stages of development suggested and drawn by Dankesque:

The Spitz breed suggestion was greatly popular from back to 2007, but the first news post on wajas about the breed coming out was on June 6th, 2010. Apollo showed new waja headshot without context. On June 7th, she admitted working on a new breed called the Spitz. She wrote "Accip resized a huge amount of items and Soteria did the markings so it's near completion. I have to finish up some mutations and redraw about 140 or so accessories then we can get this baby released!".

On June 21st 2010, the Spitz waja showed up on waja demo generator, and in the news post Apollo asked waja users to help test mutations and markings before breed release.

On June 22nd 2010, Apollo said that there were some really awesome Spitz designs people were making and suggested that it was becoming her favorite breed.

On June 30th 2010, Spitz tokens and Star Packages were in the Token Shop. Spitz was announced to be a new common breed, meaning that the Silver and Gold Tokens for them will always be available in the token shop.