Wajas are able to have a variety of features in any color of the rainbow. When making customs, you enter colors for the markings, mutations, base color, and eye color of your waja through hex codes. When dyeing Wajas, you enter the color of the dye marking with a hex code.

Additionally, when breeding wajas the colors of features on the offspring are determined by mixing the hex codes of the equivalent features on the parents. As a result, understanding hex codes and color mixing can greatly improve the results of your breedings.

What are Hex Codes?

Hex Codes are codes in the format of a pound sign(#) followed by six characters ranging from 0-9 and A-F. In Wajas, hex codes are used to define the colors of Wajas' markings, mutations, base color, and eye color.

The above colors, especially the white, black, red, blue, green, and yellow are sometimes referred to by players as "pure" colors. So if someone says "pure black", they probably mean that the hex code should be #000000. It is important to note that how colors mix on a computer (using light) is not always exactly the same as how they would mix with paints (using pigments). For example, breeding yellow and blue will not get you green as you might expect, but rather a murky gray color.

When considering breeding wajas, you could look at the hex codes to get an idea of what a pup's color would be like. For example, if you breed two markingless wajas with an Ancient Love Pear, and one has a base of #FF0000 and another has a based of #0000FF, you know the pup's base color will be close to the average base color of the parents. 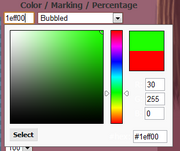 Hexadecimal color codes are averaged by averaging the individual components of each color. So, in our example, you would get:

So, we know the pup's base color will be somewhere close to #800080 or about 128 red, 0 green, and 128 blue. This color would be close to a medium dark purple, which you probably could have guessed if you realized the parents were a pure blue Waja and a pure red Waja.

However, the results of mixing hex codes is not always obvious. Take the previous example, for instance, and change the pure blue parents' hex code to #00FFFF (pure cyan). Since cyan is a color that's rather similar to blue, you might expect the pup to be close to purple in color also. If we average the hexes again though, we would get a color close to #808080. This color is actually a shade of gray right between black and white.

This color selector is present when selecting colors for custom wajas and dyes.]] Wajas offers a great convenience to its users by allowing them to select colors from a dynamic color palette. This color selector tool lets users choose colors then fills in the hex codes for them. Because of the convenience of this tool, Wajas users can easily play the game, create customs, and add dyes to wajas without ever having to understand how to read hex codes. Because of this, hex codes may seem like mysterious strings of numbers and letters that somehow represent colors to users.

However, understanding hex codes is actually quite simple and is covered on this page in the section Hexadecimal Numbers (Hex Codes in Depth)

The color mixer is a tool that can be used to determine the range of colors that are possible between two given hex codes. This is accessed under the help tab. When using this, you will take the hex codes for a particular feature in each parent (such as the base color, or the color of a shared marking) and put them in the two input fields. Once you have the appropriate hex codes entered, press the "Generate Sample Spectrum" button to get a range of possible colors that fall between the parent's colors.

For information regarding using this tool for pup predictions, please see Pup Predicting.

Every color that displays on your computer monitor is created by mixing red, green, and blue. The use of red, green, and blue to make all colors is called the RGB color model. When a computer interprets a hex code, it's actually reading for a value of red from 0 to 255, a value of green from 0 to 255, and, yes, a value of blue from 0 to 255. Hex codes are in the format of a pound sign ('#') followed by six characters that range from 0-9 and A-F. The 'hex' in hex codes is short for hexadecimal. Although you don't actually type the '#' in front of a hex code while entering colors on Wajas, the pound sign is used to tell the computer that you are talking in hexadecimal numbers.

Basically, with hexadecimal number system, bases of 16 are used instead of bases of 10. The letters in the numbers are used to represent single digits that are higher than 9. Therefore:

Note that in the examples above, the first digit is multiplied by 16 each time. This is similar to how we normally multiply digits by 10 for each place value the digit has. For comparison:

Take the hex code #FF00EE for example. You get:

There are some quirks to the waja color mixing system that aren't immediately obvious when you're new and haven't fooled around with hex codes before. There are 8 colors you can't make by mixing other colors together (primary colors!) and understanding them will help you make good decisions when breeding and picking colors for dyes/customs that you want to be interbreedable. (Because you can't make these by breeding, but you can breed almost anything from the right combination of the basic 8.)

The [color mixer] page explains a lot of this, but I'll go over it again to refresh you.

Wajas colors are 6 digit hexadecimal codes (hex codes), which are the standard means of describing colors on a computer monitor. The hex code is 3 pairs of digits, describing (in order) how red, green, and blue the color is.

(The letters come in because it's HEXAdecimal, not your regular old 0-9 decimal system you know and love. The letters A-F represent numbers 10-16. I'm sure you can google that if you want to know more about it, it's neat.)

The smallest any of your color values can be is 00 (black, 0 of that color), and the biggest is FF (FF stands for the number 255). 00 and FF are pure. It's impossible to get a 00 or FF when at least one of your waja's parents doesn't already have it. Your pup's numbers for red, green, and blue on each part of their body/each marking will always be somewhere between the parents'. (And maybe the same as the parents', if you're using a regular Love Pear instead of an Ancient Love Pear.) You can't make colors outside your parent range.

There are 8 possible arrangements of "perfect" 00s and FFs in hex color codes, and these 8 unmixable colors are the Primary Colors of wajadom.

The Eight Colors You Cannot Mix on Wajas

Simple and obvious, right? You can't make #000000 or #FFFFFF, which is why lineages of markless pure white and pure black wajas have always been valuable.

These pure colors are Red, Green, and Blue. They are each pure in one part of their hex code, while the other two parts are black.

These will be familiar if you've read anything about printing ink colors. (You can google CMYK if you're curious.) Cyan, Magenta, and Yellow are each pure color in two parts of their hex code, with one part left black.

What Happens When Combining Primaries

(Black and White are pretty obvious, so we'll just talk about the RGBs and CMYs.) Mixing primaries in the same groups creates colors kind of like the other group. When you mix any two of Red, Green, and Blue together, you get a dark yellow, a teal, and a purple.

Mixes between the RGB primaries are sort of dark, because each RGB primary has one section at full color and two that are all black in its code.

Like a mirror version of what we just did, mixing Cyan, Magenta, and Yellow produces pastel versions of the RGB primaries.

CMY mixes are lighter, because again: they are two parts color and one part black.

Grey is the easiest color to mix. Anything where your RGB values are sort of close (or like here, the exact same) will be a shade of grey. All muddy wajas lean toward grey in the end. It is like the color singularity, the point to which all bad color decisions eventually lead if you keep breeding poorly matched wajas.

The mostly-similar numbers also mean, however, that grey is the easiest color to color-correct from. (Like say, if you're trying to breed Roosters and something's not quite right. Once you've bred to grey, the non-grey parent's color will have a very strong influence on the pup.)

This is one of the most legendary quirks of the hex color mixing system, it trips up newbie waja breeders all the time. Now that you can see these hex codes, this might make some sense.

The FF's and 00's in these codes are exact opposites!

That means, just like pure white and pure black, crossing these two colors will create true grey. (You know. With some wiggle room for the breeding script to go one way or the other.)

(The same thing will happen if you cross Red and Cyan, or Green and Magenta.)

The Closest You Can Get: An Example

As shown above, mixing your primaries can get you kind of close to each other in a pinch.

Here's a breakdown of how you get a pastel green from other primaries!

You will never get the bright, rich, acid green of #00FF00 without a pure parent, but you can have some success with Yellow and Cyan, not blue. Cyan is a CMY primary, and you can use the red value in yellow to filter the blue out of cyan. Look here.

They both have an FF in green. One has nothing in blue, while the other has nothing in red. When bred, the pup will have a middle value in red and blue. Because those two values are the same (or close), they cancel each other out and the green shines through. Your result is going to be somewhat greyed because you have something besides 00 in your red and blue, but it works!

(The same holds true if you want to breed a red from Yellow/Magenta or a blue from Cyan/Magenta.)

You'll get better results if the colors you're mixing are closer to the one you want. Knowing this, you can select mates to manipulate colors without having to check the color mixer so much.

If you want to breed a primary color waja, it's best to find wajas that are already pure in that color (or close enough, if you don't need pure). But if you just want to get something sorta close (maybe so you can breed it with a more ideal mate), you now know enough to help yourself do so! :D