All examples feature wajas with FF0000 (pure red) horns. However, this mutation can come in any Hex Color as well as any Texture.

The mutation that is now known as Prehistoric Horns was originally called Senz Horns (created for and named after Senz). At a certain point after the renaming of the mutation, they also underwent a redrawing on at least the Egyptian breed. Here is an example of the way they used to look. 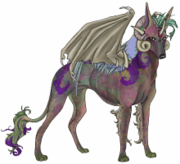