Wajas has a total of 15 (16 if Breedless is counted) breeds.

Aerials are a dominant breed of feathered wajas. Their tongue is proboscis-like, and small tufts of feathers decorate their ears, shoulders, and legs. They have talon-like feet rather than paws.

Aerials are ranked 2 in the dominance chart, below Normals, and roughly equivalent to Banes.

Africans are the only breed of wajas depicted fully face on. They have two tails, and large ears inspired by the wild african dog.

Banes are a vicious breed of wajas, intended to be released in time for Halloween 2008. They are supposed to be a scarier breed than the others. This breed is highly dominant as would be expected for a brand-new breed, roughly equal to aerials. This breed was originally designed by Ankokou.

The Corsie is modeled after a small dog breed, and appears to be looking happily at the user. It has a short, docked tail and semi-floppy ears, with big eyes. It has an apparent smile, and is lifting one foot up.

Divines are the rarest and most expensive of the waja breeds. They fall at the lowest position on the dominance chart. The difficulty in breeding divines, combined with the extreme rarity of divine custom tokens makes them amongst the highest-priced wajas available. Divines are regal wajas with wings, horns, and a pair of long whiskers like an asiatic dragon.

Divine tokens are available one day each year. On July 3, starting at 9am, gold and silver divine tokens go on sale in the token shop for 24 hours. These tokens cost 50/60 CWP each, are limited to two per person, and are "locked" until divine day ends - you cannot use a Divine token until the 24 hours is up.

Fun and playful, the Earth breed is noted for having hooves instead of paws. These hooves are the same color as the waja's body, and are sometimes unaffected by markings that would normally cover the paws.

Stunning and sleek, the egyptian breed is based off the pharaoh hound. Bracelets and collars take on a different appearance when equipped to egyptian wajas. Collars become golden torques with gems set in the centre, while the bracelets become golden cuffs.

Fire wajas are long, sleek wajas with flaming paws. They have three short, fluffy tails. The color of the flames is determined by the waja's eye color.

The Forest is a more stout and hardy breed, with short legs and a large body. It has vines growing from its fur and bark up its legs, as though it may be both a plant and an animal. The colour of the flowers on its bum is determined by its Misc. Color, which was a new trait created for this breed's release (and also ended up being applied to a few other breeds, inculding Fires.

Imps are based on a mix of a rat and an imp, a mischievous being, and was even released as an example of a rat. Imps seem to be landing from a jump on their front feet, and are smiling as if looking at the user. The imp has a long, spiked tail, and almost talon-like clawed feet.

The Normal was the first breed released on Wajas. It is the breed that Apollo, the site mascot, is. This is the most common waja, and the most dominant.

Plushies wajas are made to resemble plush toys, and have a stitched smile with glass eyes. They are posed in a way that looks almost like it is stretching by moving it's front legs out farther and moving the back legs up. Recently, the Plushie breed had undertaken a new shading, with more defined lines and slightly different eyes.

New shading was added for the Plushie breed on July 20, 2013. A comparison between the previous shading and the current shading is shown below, and a sample of the original shading has also been added. 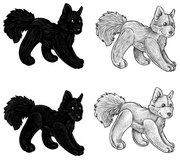 Spitz are modeled after the Keeshond dog breed, and are very fluffy. They have a long, fluffy curled tail, short muzzles, and semi-short legs. They are smiling and appear to be happy. Spitz are in a sitting pose, with their head moved in closer to their chest just a little. They were released only two months after the Imp.

Tempests are a wind breed, hence the name tempest. They are standing and looking with their head flipped back, as if something was behind them. They have curls all over their fur, symbolizing wind running through their coat.

Water wajas are serpentine and curled in a C shape. They are commonly striped/streaked with a line down their middle. Water wajas can be obtained by using a frog item on any other waja, which will turn said waja in to a water waja. You can also get a water waja from just buying one from another player or from making a custom one.

Due to their popularity, they were kept in the game instead of being fixed. Their waja image appears blank due to their lack of a breed image to call on, and no accessories or foregrounds work on them. However, Wallpapers do work on them, and Breedless wajas are often used by players to show off an unobstructed view of a wallpaper.

Breedless can be bred but are a non-dominant breed, just above Divines on the dominance chart.